(1.1) The generally accepted date for the birth of Flavius Dioscorus is around A.D. 520. Unlike his father who had to earn the status designation Flavius, Dioscorus always appears in the papyri in possession of that title (whenever a title is expected). Like sons in other well-to-do families in the early Byzantine period, Dioscorus probably studied law abroad. Although there is no evidence, Alexandria is the most likely place for him to have gone. MacCoull suggests that John Philoponus, the famous Neoplatonic Christian philosopher, was one of his teachers.
(1.2) Back home in Aphrodito, Dioscorus married—the name of his wife has not survived—and had children. The documents clearly show that his family’s financial wellbeing and safety were a constant concern.

Like his father, Dioscorus embarked on a busy career. Keenan lists “involvement in local ‘politics,’ acquisition, leasing and management of agricultural land (his own and others’), defending his own property rights and his village’s claim to rightful collection of its own taxes, free of the pagarch’s interference (autopragia).” Dioscorus’s first dated appearance in the papyri is in the year 543 (P.Cair.Masp. I 67087), when he had the assistant of the defensor civitatis of Antaeopolis personally examine the damage done by a shepherd and his flock to a field of crops. The land was under his care, but owned by the Monastery of Apa Sourous. During the years 543 to 547, the papyri show Dioscorus purchasing wool, making a loan to two Aphroditan farmers, leasing land to a priest and his brother, and having land ceded to him from another priest, Jeremiah. In August of 547, Dioscorus leased one aroura of land to the deacon Psais. This document (P.Cair.Masp. II 67128) indicates that Dioscorus had by then attained the office of headman of Aphrodito. 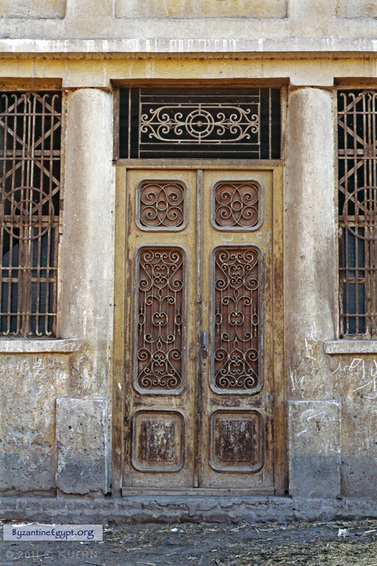 (2.1) After his father’s death in 546/7, problems with the pagarchs intensified. Dioscorus wrote a petition to the emperor Justinian and a formal explanation of the problem to the empress Theodora, Aphrodito’s special patron. Copies have survived. The former, P.Cair.Masp. I 67019 v (in poor condition), discusses Aphrodito’s autopragia status and mentions the pagarch Julian (l. 17). The latter, P.Cair.Masp. III 67283, paints a gloomy but generally nonspecific picture of the tax conflict. The petitioners, representing much of the male population of the village and including ecclesiastics from several churches in Aphrodito, begin with the complaint that a nobleman has overstepped his powers by threatening to bring them, the petitioners, before the pagarch of Antaeopolis in the matter of the yearly assessment. Since Aphrodito, however, has the right of autopragia, the correct authority in their case would be the duke. Dioscorus then depicts the state of affairs at home. After raids by barbarians, the villagers were trying to lead a quiet and good life. But like a plague, the pagarch and his cohorts attacked. “This papyrus is not able to contain all the unspeakable injuries and injustices, except to describe them in an unbroken wail.” Dioscorus then declares that “the one, only, sole thing we have left is hope,” which is a literary allusion to Hesiod’s farming epic Works and Days 96. And the petitioners conclude by invoking the healing hand of the empress and the ecclesiastical authorities.
(2.2) Although carefully and artistically composed, the explanation to the empress and the petition to the emperor seem to have had no effect. So in 551, three years after the death of Empress Theodora, and ten years after his father Apollos’ trip, Dioscorus was compelled to go to the capital of the empire with a contingent of at least three Aphroditans. The fact that Aphrodito sent a group of representatives all the way from Egypt to Constantinople (now Istanbul, Turkey) makes clear that the grievances must have been serious. Dioscorus may have spent three years negotiating their problems in the “queen of cities”. Concerning the object of the trip, the delegation from Aphrodito finally obtained an imperial rescript, a draft of which has survived among Dioscorus’s papers. In it, Dioscorus states that while his father had been in Constantinople because of grievous injustices, a certain Theodosius took advantage of his absence and collected the taxes. Theodosius turned nothing over to the provincial treasury, and the village was still being held responsible for the taxes. Dioscorus had gone once already to Constantinople and had obtained a rescript, which was then ignored by Theodosius. Now in the rescript of 551, Dioscorus requests that the matter of the first rescript be brought to completion. And finally, he claims that Julian, the pagarch of Antaeopolis, was trying to bring Aphrodito under the control of his own pagarchy. The emperor replies to the charges by instructing the duke of the Thebaid to examine the issues and, if justified, to stop the pagarch’s aggression.
(2.3) A closer examination of this and the other documents surrounding the visit to the capital reveals Dioscorus’s tact as a lawyer and the persistence of the tax-crimes against Aphrodito. Several documents dealing with the confiscation of tax money by Theodosius have been found among the Dioscorian papers. Although the nature of their relationship to one another cannot be established with certainty, Richard Salomon offers a good examination of the evidence and a tentative chronology: 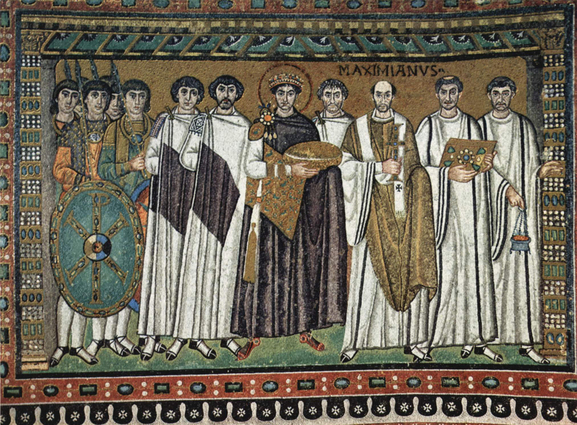 Court of Emperor Justinian with (right) archbishop Maximian and (left) court officials
and Praetorian Guards. This and the mosaic above were completed before 547 and are
in the Basilica of San Vitale at Ravenna, Italy.
(2.4) So in 551 Dioscorus returned to Constantinople with a delegation from Aphrodito and obtained a letter from one of the highest officials of the empire (perhaps the Praefectus Praetorio Orientis) containing a personal recommendation to the duke (P.Geneva Inv. No. 210). Dioscorus also obtained a more strongly worded imperial rescript (P.Cair.Masp. I 67024) addressed to the duke of the Thebaid and requesting him to take care of the previous imperial command. None of the surviving imperial documents is an original: the original rescripts would have been turned over to the duke. But Dioscorus’s archive contains two letters which stem from the imperial palace and which are originals. Whether or not the matter with Theodosius was ever settled cannot be determined from the papyri. The second letter and the second imperial rescript, however, may have had a temporary effect on the pagarch. There is no indication of additional aggression by a pagarch against Aphrodito until after the death of Justinian the Great (565).