(1) Among the fragments of Menander and Homer were found poems composed by Dioscorus himself. They are the world’s oldest surviving poems written by the hand of a known poet. Yet before the discovery of the archive, modern scholars were ignorant of the poetry of Dioscorus. There is no mention of him in ancient anthologies, no transmitted manuscript has been found, and no papyrus from another site contains his verses. 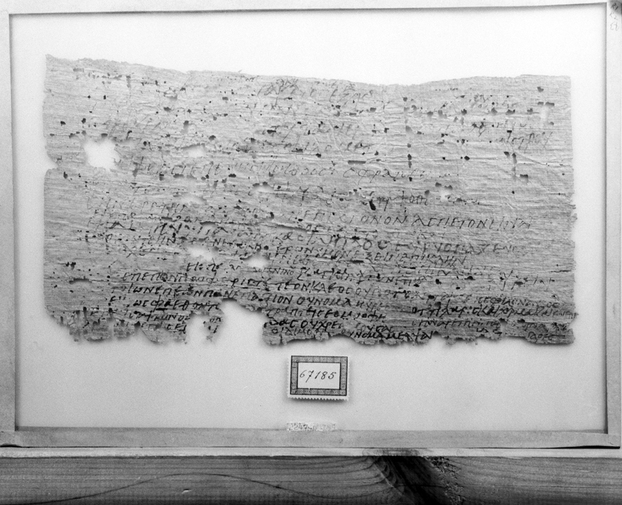 P.Cair.Masp. II 67185 verso (= Heitsch 19, 20, Fournet 8, 9). The poems by Dioscorus are drafts with corrections, changes, and alternatives. This fragment holds two poems written on the back of a letter, one addressed to Hypatius and the other to Paul. They both contain acrostics. Photo © 2011 C. Kuehn

(2) Since their discovery, the poems have been published many times. The first appearance of Dioscorus's poetry in the modern era was in 1907, when a collection of literary papyri purchased by the Berlin Museum was published in Berliner Klassikertexte V. Griechische Dichterfragmente I: Epische und elegische Fragmente (BKT V). In this edition, among papyrus fragments of Homer, Hesiod, Theocritus, and Nonnus, there appeared three panegyrics ("poems of praise") in trimeters and hexameters. The author of the first panegyric poem (P.Berol. 5003) could not be identified in 1907. (Much later, in 1968, Toivo Viljamaa suggested that “the poem relates a battle against the Blemmyes during the reign of Theodosius II, and its probable writer is Cyrus of Panopolis.”) The second panegyric poem (P.Berol. 10580) was addressed to John, “the new leader”. W. Schubart, Ulrich von Wilamowitz-Moellendorff, and Paul Friedländer studied the poem and suggested that this John was an important administrator of Egypt, the Praefectus Praetorio Orientis. They further surmised that the third panegyric poem (P.Berol. 9799) was addressed to a duke of the Thebaid, a region in southern Egypt. The authors of these last two poems were unknown; it was not suggested that a single author had composed both. Three years later, in 1910, Jean Maspero published a poem in Byzantinische Zeitschrift that he was certain was by the same author as the panegyric to John. And in an essay published in 1911 in Revue des études grecques, Maspero identified the author as Dioscorus of Aphrodito.
(3) What had led Maspero to this identification was the observation that the handwriting of some hexameter verses on the verso (“back”) of P.Cair.Masp. I 67097 matched the handwriting of a receipt signed by Dioscorus, which was written immediately above the verses. Dioscorus had obviously reused this papyrus with the receipt and the sale of land on the recto (“front”) as scrap paper on which to sketch out several poems. Furthermore, verses of the poem below the receipt corresponded to verses in poems on other papyri from the Dioscorian archive, which poems had verses that corresponded to those in the panegyric to John. These repeated verses acted “as a signature which permitted us to recognize his authorship," said Maspero, "when the capriciousness of his handwriting gave rise to doubts.” The revisions squeezed between verses and into the margins indicated that Dioscorus had not merely copied but had composed the poems. The Berlin panegyric to John was augmented in 1936, as mentioned in Chapter I (Dispersal), by the addition of an iambic prologue, which had been published with the Cairo papyri in 1916 but had not been recognized as part of the poem to John. The author of the panegyric to the duke of the Thebaid (P.Berol. 9799) was not identified until 1927, when H. J. M. Milne stated that it too was composed by Dioscorus. Leslie MacCoull, a Coptic historian, confirmed this statement in 1988 on the basis of an examination of a photograph of the papyrus. 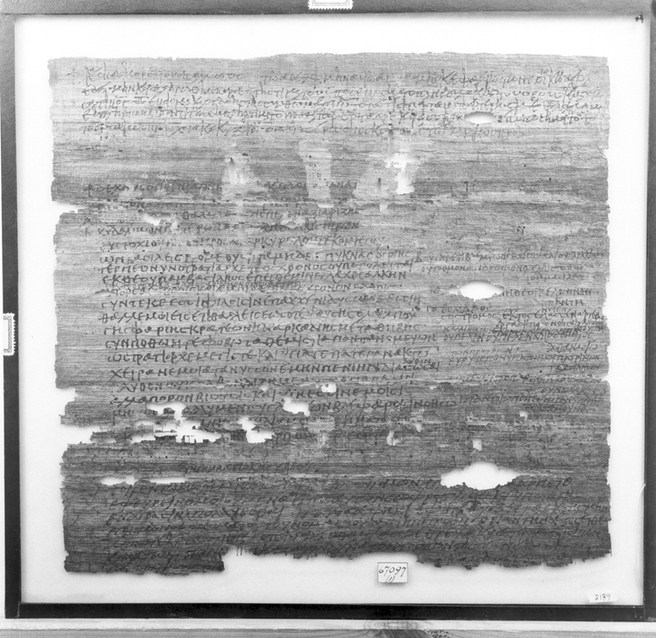 P.Cair.Masp. I 67097 verso, parts A, B, C, and D (= Heitsch 4, Fournet 10, verses 21-50). This is the first part of a long and complex papyrus roll. Between the receipt at top (A) and the prose text at bottom (D) is an hexameter poem of 21 verses (B). Squeezed into the margin at the right are 9 more hexameter verses of the same poem (C). The poem is addressed to Athanasius. Maspero used it to help identify a poem in Berlin as also written by Dioscorus. Photo © 2011 C. Kuehn

(4) In his article of 1911, “Un dernier poète grec d’Égypte: Dioscore, fils d’Apollôs,” Jean Maspero published thirteen poems by Dioscorus,  French translations, and an examination of their style. Twelve of the poems make use of the popular genres of encomium (“praise for a distinguished person”) and epithalamium (“celebration of a wedding”). The thirteenth poem begins with sixteen anacreontic verses, reflecting the style and ethos of Anacreon of Teos. It ends with a chairetismos, a popular hymn form in which a litany of verses begins with the repeated salutation Chaire! (“Hail!”). The addressees of several of the poems are named by Dioscorus in the verses or in the titles: Athanasius (1, 2), Victor (5), Dorotheus (6), Constantine (7), Colluthus (9, 10, 12), and Callinicus (13). The honorees of the other poems are not named. Dioscorus calls one addressee a pagarch and count (10), others are counts (6, 12). Maspero suggested that some of the poems were addressed to dukes: Athanasius, Callinicus, John (not in this collection), and the recipient of poem 3. One poem was addressed to a praeses (“civil governor”) of the Thebaid: Victor. Examining the style of the poetry, Maspero (like Schubart and Wilamowitz) found that the hexameter verses of the encomia and epithalamia were similar to those of Nonnus’ poems, whose Homeric vocabulary and strict metrical system exerted a strong influence among poets of the sixth century. Maspero thought that Nonnus’ talent was remarkable, but Dioscorus was no more than a distant disciple. Maspero complained that Dioscorus was obscure. There was tension between, on the one hand, the ideas that Maspero imagined Dioscorus was trying to convey and, on the other hand, the expressions that Dioscorus had actually used. Certain phrases were so ambiguous that Maspero wondered if Dioscorus himself had understood what they meant.
(5) In 1917 H. I. Bell briefly described the Dioscorian poems that had been found among the papyri purchased by the British Museum (P.Lond. V 1817-1820), and in 1927 H. J. M. Milne published the texts and commentaries on the eleven poem fragments. Milne’s opinion of the talent of the poet was even more damning than Maspero’s. “At no moment,” Milne wrote, “has he any real control of thought, diction, grammar, metre, or meaning.”
(6) Dioscorian poems and poem fragments continued to turn up in other collections. Unfortunately, when someone fortuitously or clandestinely unearthed a Dioscorian papyrus, he sometimes tore it apart, either by accident or with the intention of earning a greater profit, and sold the pieces to different collectors. 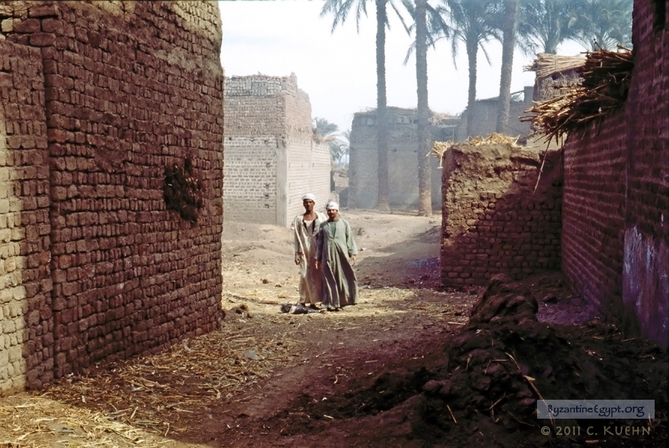 "Diggers." Kom Ishqaw (Aphrodito), Egypt. Photo © 1995, 2011 C. Kuehn
This dispersal and fragmentation created a significant obstacle for literary critics attempting to study the poetry of Dioscorus. Thus Ernst Heitsch made a valuable contribution when, over half a century after their first discovery, he gathered most of the fragments attributed to Dioscorus into one volume: Die griechischen Dichterfragmente der römischen Kaiserzeit, vol. 1 (Göttingen, second edition 1963), section XLII. For each of the twenty-nine poems in his edition, Heitsch identified the collection or collections holding the papyrus, gave a brief bibliography, and appended a critical apparatus. This remained the definitive edition of the poetry of Dioscorus for three and a half decades. Then in 1999, Jean-Luc Fournet published Hellénisme dans l’Égypte du VIe siècle (Cairo). In two volumes Fournet combined and brought up to date the earlier editions of the poetry and also included the fragments of the Iliad and its scholia found in the Dioscorian archive.
(7) Maspero’s and Milne’s negative evaluations of the quality of the poetry went virtually unchallenged by subsequent historians—except for Leslie MacCoull. MacCoull began already in 1976 to challenge the traditional views, which were based on comparisons to Classical and Hellenistic models. Yet it wasn’t until her 1988 monograph, Dioscorus of Aphrodito: His Work and His World (Berkeley), that she offered a comprehensive view of her position: the obscurity in his poetry was due largely to the influence of the Coptic language and culture. If one were to understand the Coptic language and culture, one would better appreciate the poems. Yet, although MacCoull showed the presence of the Coptic culture in the poems, her discussions never demonstrated how Dioscorus’s Coptic heritage interfered in the logic of the poetry. So Maspero’s argument of obscurity, presented in his 1911 collection and essay, remained virtually intact.
(8) This was changed in 1995, when Clement Kuehn published Channels of Imperishable Fire: The Beginnings of Christian Mystical Poetry and Dioscorus of Aphrodito (New York). In his evaluation, Kuehn examined the poetry not from an anachronistic perspective of the Classical and Hellenistic cultures, but the Byzantine culture (A.D. 300 - 700 in Egypt). After describing the literary trends of the early Byzantine period, and Dioscorus’s many personal and business ties with the monasteries in the Thebaid, Kuehn showed that the imagery in the Dioscorian poetry corresponded to the spiritual allegories of the era. Spiritual allegory was popular in poetry and in literary and biblical exegesis, and these allegories were regularly read outloud to the monks. Spiritual allegory was also prevalent in Byzantine artwork. For instance, the early icons at St. Catherine’s monastery in Sinai, Egypt, portray spiritual beings (saints, angels, and the Trinity) as nobles in an imperial court: emperor, empress, dukes, counts, and generals. Dioscorus’s poetry, Kuehn said, falls into the category of typology. In this kind of allegory, the surface level of the poem’s narrative contains some historical truth. The poem gains its real force, however, through its spiritual symbolism: the historical persons and events are types of spiritual realities. Not every historical element in such a poem is symbolic, but the symbolic level functions simultaneously with the historical. Dioscorus’s verses are also saturated with Hellenistic (and Coptic and pharaonic) motifs, but this was a standard, accepted, and even respected practice in Byzantine spiritual poetry, as seen in the celebrated verses of Gregory of Nazianzus. 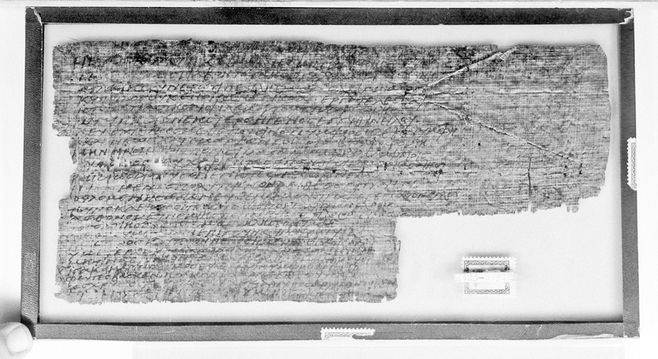 P.Cair.Masp. III 67318 (= Heitsch 23, Fournet 34). This poem was written for the wedding of Isaac. The first letters of each verse contain an acrostic that spells out: “For Isaac, the most famous bridegroom.” While reading the poem, one cannot resist thinking about the Isaac of Genesis, whose wedding and marriage to Rebekah dominate his story in the Bible. Photo © 2011 C. Kuehn