(1.1) “The village of Aphrodite,” Keenan wrote, “was more than an ordinary Byzantine Egyptian village.” During dynastic times and into the early Roman period, Dioscorus’s village had been the capital city of its own nome, the tenth of Upper Egypt. (A nome was a governmental district similar to a county in the United States. Upper Egypt was in the south, which is higher in altitude than the north.) Perhaps at the beginning of the Byzantine period and certainly before the sixth century A.D., the tenth nome was merged with the Antaeopolite nome across the Nile River, and Aphroditopolis lost its status as a capital and its designation as a polis (“city”). It was now the village of Aphrodite, or simply Aphrodito. 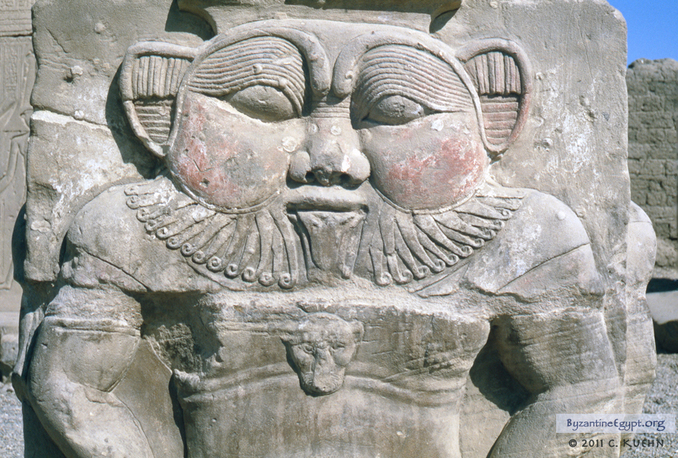 At the Temple of Hathor, goddess of love and beauty, stands a relief of the Egyptian god Bes.
He was the protector of women in labor and children. He eventually became the enemy of all evil.
Photo © 1995, 2011 C. Kuehn

During the fifth century, moreover, the administrative structure of Upper Egypt underwent a transition. The areas of a nome outside the capital city were divided into pagi (“districts”) and placed under the jurisdiction of a pagarch. The pagarch had the responsibility to collect the public taxes from the villages under his or her jurisdiction. Aphrodito, however, received from the emperor the privilege of autopragia, which meant that the village was given the right to collect its own imperial taxes and deliver them directly to the provincial treasury. Thus Aphrodito was outside the jurisdiction of the pagarch with respect to public taxes. The surviving documents do not disclose exactly when Aphrodito received this special privilege, but for several generations (Dioscorus insists) it faithfully met its public tax requirements. And in the mid-sixth century, for reasons unknown, Aphrodito was enjoying the special patronage of the empress Theodora.

(1.2) The pagarchs living in Antaeopolis, now the capital city of the merged nome, seem to have resented the village’s autopragia, and the papyri show that the pagarchs often violated Aphrodito’s special tax-status. The pagarchs were able to do so with some degree of impunity because the pagarchs were, in effect, powerful. The pagarch’s official responsibilities, as mentioned above, were the financial affairs of a nome, especially the taxes. The pagarch came from the nobility of the area and always had an honorific title. He or she was probably selected by the nobles, bishop, and corn-buyer of the capital city of the nome. And the selection could have been based upon the amount of land the candidate owned (to cover any delinquencies in the tax collection). Once a candidate was selected, he or she was appointed by the praetorian prefect—an appointment that had to be confirmed by the emperor. Once the appointee was in office, the reigning duke of the region could issue orders to him or her and express any dissatisfaction to the emperor, but the duke could not remove the pagarch. And while the papyri show that there was a rapid turnover of dukes, the pagarchs of the nomes under his jurisdiction tended to remain in office for a long time. The office was sometimes passed on hereditarily. To enforce his work, the pagarch could and did employ local policemen, men from the provincial government, the private guards of large estate owners, and soldiers. Thus the pagarch—because of personal wealth, strong ties to the nobility of the community, the appointment by Constantinople, a relatively long term in office, and an armed “backup”—was a person whose disfavor was avoided. The conflicts that developed between Aphrodito and the pagarchs were neither trivial nor bloodless. 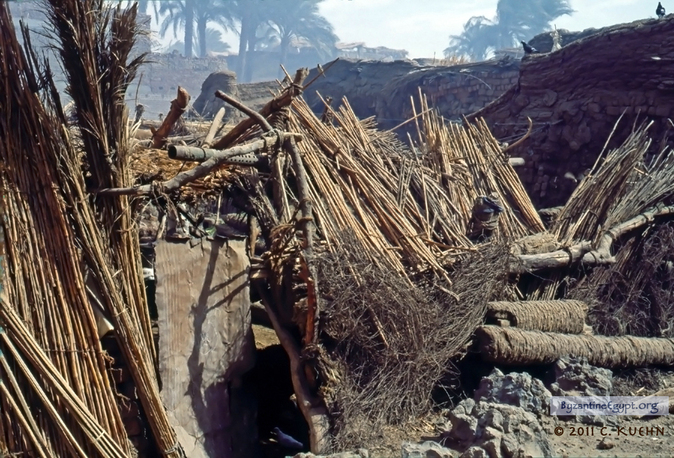